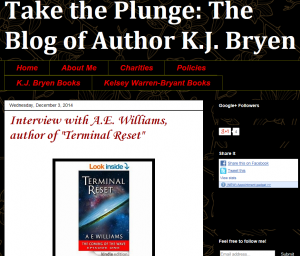 Take a peek behind the scenes with A.E. Williams as he writes “Terminal Reset – The Coming of The Wave”.

It’s eye-opening, entertaining, and best of all FREE!

Check it out NOW!

Recently, A.E. Williams was invited to submit an essay on the importance of manned space flight by the Speculative Fiction Showcase Blog.

You can view it here.

Mr. Williams has worked on some of the premier aerospace technology ever developed during his long career. If you are interested in a bit of perspective and history, reasoned thought about space programs, and a tribute to those brave men and women who have given their lives in the pursuit of the Greatest Adventure, then hop on over and enjoy the read.

Terminal Reset – The Coming of The Wave – Chapters 15 and 16

The astronauts in the ISS are in danger of freezing to death when a daring rescue attempt is planned by one of the most recognizable adventurers in the world. Will he be in time to rescue Sonya,  the woman he loves?

Major Anton Golovonov has been marooned in North Korea, and begins SERE tactics to find out more about the damage caused by the nuclear weapons unleashed by his bomber command.

In Rome, Dr. Giovanni Pasarelli experiences first-hand the effects of The Wave, and his Destiny is forever altered.

Find out why this series is the most up-to-date hard science fiction ANYWHERE!

When The Wave strikes, it changes everything.

The exciting story of Terminal Reset – The Coming of the Wave continues!

An ancient alien spacecraft returns from an ages long deep-space mission to its home planet – Mars. As they traverse the Sol system, the crew discovers the devastating effects left behind from The Wave on the outer planets. They stop at Mars, and then detect that there is an interplanetary war occurring between Earth and something located on its Moon. They decide to investigate…

This Episode takes place in the Terminal Reset ‘Verse, but presents an entirely different viewpoint. Written from the perspective of a crew of space pioneers, returning from an ages long voyage into deep space to their home planet – Mars.

What they encounter upon their return to our Solar System are the devastating effects from the passing of The Wave.

Ancient secrets surrounding the origins of Civilization, the lost cities of Earth, and the intent of life on other planets is explored in this exciting tale that augments the reality unfolding in the Terminal Reset serials! 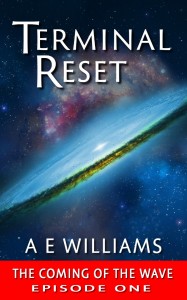 I will be running a THREE DAY PROMOTION for the first two Chapters of the Terminal Reset series (Episode 1) on Amazon from  07/29 thru 07/31.

You will be able to purchase for FREE at

for the duration of the promotion.   🙂

Currently, SIX Episodes have been published, with the next Episode approximately 70% complete.

If you want to read hard science fiction with a contemporary setting, that is packed with adventure and excitement, this is it!

The Coming of The Wave is the first Volume of the story of a mysterious force from the early Universe traveling the trackless void of interstellar space, and millions of years later coming into our Solar System.

It’s arcane physics warp our own Reality, and its effects are unlike any before in ANY science fiction novel or short story you have EVER read!

The science is real, and recent news reports have validated many of the scenes that were depicted in the series months BEFORE the reporting occurred!  😮

You can also visit the website for more information about the series. 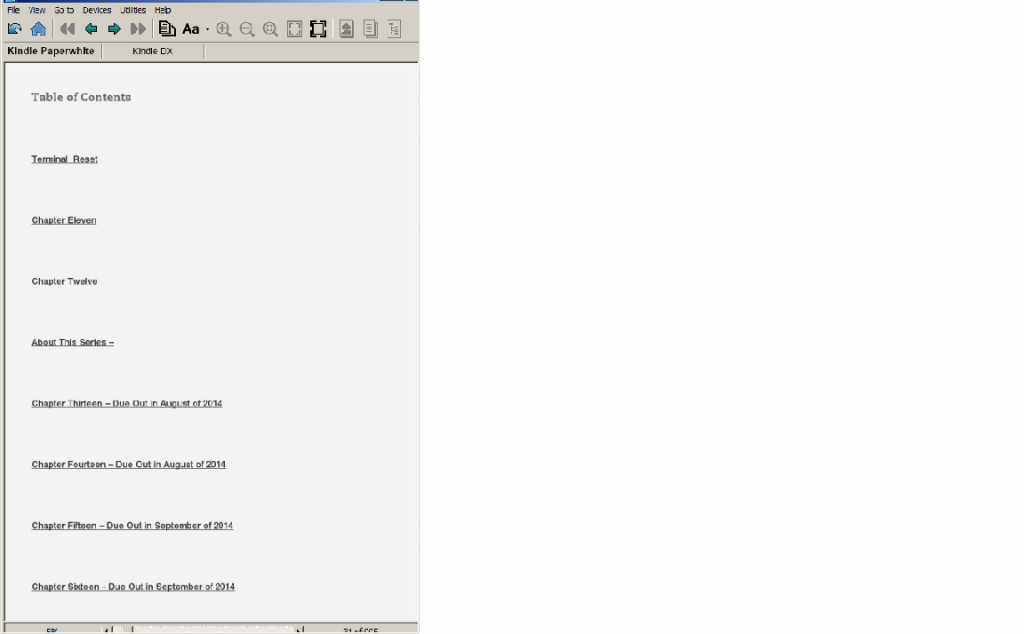 How To Make a Quick Simulacrum of Your Kindle eBook That You Can Then Put on Your Website or Blog in Ten Easy Steps.

1) Open your book with the Kindle Previewer.

4) Open Paint ( this is the simplest way. You graphics gurus can use GIMP, or Adobe, or whatever).

6) Trim to size (This is trial and error, but pretty easy.)

You now have a picture of what your TOC looks like on a Kindle. 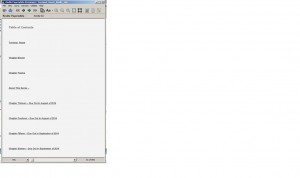 10) Upload to the Media or Images folder on your site.

You can do this for Ipad and Iphone as well, since the Previewer apparently converts to those formats.

Terminal Reset – The Coming of The Wave – Chapters 1 and 2 will be FREE on Amazon for two days!

Get the first Episode of this exciting story for FREE.

Jump into the hard science fiction Universe where The Wave comes from beyond time and space to create major changes to the Earth and its inhabitants! You will find out how The Wave effects the world, and its population!

Terminal Reset – The Coming of the Wave – Chapters 11 and 12 are in the top 100 Hot New Releases on Amazon!

The latest Episode (Book 6) in the exciting hard science fiction series “Terminal Reset – The Coming of The Wave” has just been released on Amazon and is #62 in the HOT NEW RELEASES TOP 100!

This Episode follows the ongoing adventures of Dr. David Harding and his wife after The Wave has hit! Dr. Tatania Golovonov is in Puerto Rico, attempting to find other survivors.

The world superpowers are engaged in deadly nuclear weapon exchanges, and no one has discovered the cause of the original blasts that destroyed two US East Coast cities.

In the New Mexico desert, one man knows the truth about Mars, and is trying to escape his captors – The United States Military!

And, in the Northern United States, The General begins to build his power base!

We hope you are enjoying the story, and are anxiously awaiting the next Edition.

We are aiming to release the first Omnibus in December. Stay tuned!